What Keeps Us Going

"I moved to the Sycamore area from Chicago, North Avenue & its volunteers introduced me to Love,Inc. I was given work boots by Love,Inc as well as household items. I don't know how I would have coped during those difficult times without their help." I later became a volunteer to help others in similar situations as mine.

We're here to encourage you. Please stop by during these hours:

To support this Ministry

WARNING: Please note that when you select a you-tube video icons you are viewing film trailers located on the you-tube site, NOT our website.

North Avenue cannot control what videos your brower allows you to view on the internet. All you-tube videos are not suitable for viewing in our opinion. Please use good judgement as you surf the internet.

Would you like to learn more about enriching your child's education BEFORE they enter the educational system?

Bring the family out for an evening of free popcorn & a movie on Fridays.

The path of true love never runs smoothly. Just ask Dave and Clarice Johnson. After many years of marriage, their affection for each other is being severely tested by life. Following a car accident that temporarily sidelines Clarice, the couple must come to grips with physical temptations, financial pressures and emotional challenges that threaten their love for each other. Ultimately, they must determine whether or not their vows are easily broken in this soul-stirring film based on the inspirational best-selling novel by T.D. Jakes. MPAA Rating: PG-13 © 2009 Screen Gems, Inc. All Rights Reserved. PG-13 16 and up- "Over the Hedge" is shown for younger kids.

﻿"It's a Wonderful Life"

Frank Capra's classic bittersweet comedy/drama about George Bailey (James Stewart), the eternally-in-debt guiding force of a bank in the typical American small town of Bedford Falls. As the film opens, it's Christmas Eve, 1946, and George, who has long considered himself a failure, faces financial ruin and arrest and is seriously contemplating suicide. High above Bedford Falls, two celestial voices discuss Bailey's dilemma and decide to send down eternally bumbling angel Clarence Oddbody (Henry Travers), who after 200 years has yet to earn his wings, to help George out.

But first, Clarence is given a crash course on George's life, and the multitude of selfless acts he has performed: rescuing his younger brother from drowning, losing the hearing in his left ear in the process; enduring a beating rather than allow a grieving druggist (H.B. Warner) to deliver poison by mistake to an ailing child; foregoing college and a long-planned trip to Europe to keep the Bailey Building and Loan from letting its Depression-era customers down; and, most important, preventing town despot Potter (Lionel Barrymore) from taking over Bedford Mills and reducing its inhabitants to penury. Along the way, George has married his childhood sweetheart Mary (Donna Reed), who has stuck by him through thick and thin. But even the love of Mary and his children are insufficient when George, faced with an $8000 shortage in his books, becomes a likely candidate for prison thanks to the vengeful Potter.

Bitterly, George declares that he wishes that he had never been born and Clarence, hoping to teach George a lesson, shows him how different life would have been had he in fact never been born. After a nightmarish odyssey through a George Bailey-less Bedford Falls (now a glorified slum called Potterville), wherein none of his friends or family recognize him, George is made to realize how many lives he has touched, and helped, through his existence; and, just as Clarence had planned, George awakens to the fact that, despite all its deprivations, he has truly had a wonderful life. ..Rated G- 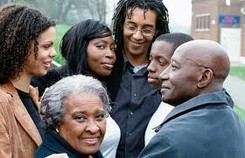 The American-African Family is an Endangered Species.

At North Avenue our goal is to develop programs﻿ that encourge, strengten and promote Christian values, including marriage. Why not come out and join us.

I read an interesting article on the family as it relates to the industrial revolution. I suggest you take a few minutes to read it by clicking below. Also, Richard and Rita Tate have written an excellent book on the family unit. It’s entitled "11 reasons Families Succeed" Contact us for a copy.﻿

Are you tired of Payday loans, "Rent to own stores" and currency exchange ripoffs? Then maybe you're ready to learn Biblical Stewardship and stop being a consumer.